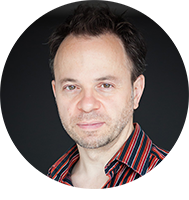 Trained actor, he holds two degrees in Performing Arts from the Conservatoire d'art dramatique de Québec and UQAM. In 1993, he starts out his career as a professional actor, appearing in various plays, movies, and even at the circus (Cirque du Soleil – 2003). He also works for about 10 years in dubbing and voice-over. In 2001, he goes back to school and obtains diplomas in Direction at INIS (2001), Staging at the Conservatoire d'art dramatique de Montréal (2003) and Video Editing at the NAD Centre (2007).
He produces a fictional short film « Portrait d’âme » in 2004, followed by many other productions like video clips, advertisements, corporate, promotional and Web videos. That same year, he creates his own production company, Les Productions CinéClap.
He also works as a Cameraman and Art Director for television shows ("Mordu de la pêche” - Canal Évasion / "Le monde en VR" – TVA) and for numerous show recordings: music, dance, theater, galas, comedy, special events. In video editing, he works for features "Les mots gelés" et "La voix de l'ombre” and in various corporate, promotional and video clips. For the stage, he signs his first production in 2002, “L’homme de Rangoon”, presented at the 5e Salle hall at Place-des-Arts, and organizes numerous Public Readings. He has been also the director of the tango show "Chispa" with the choreographer Marika Landry, for the company Tango Émotion, presented in june 2015 in Montreal.
He is also an active photographer since 20 years, working in castings, films, for the stage and for corporate assignments. His style is strongly influenced by cinema, an art he is fond of, and he is among the rare photographers to use film from time to time.
In 2016, he directed a documentary about the violinist Alexandre Da Costa and the Vienna Symphony Orchestra (Wiener Symphoniker) as: "Der Stehgeiger, The Standing Violinist", nominated at the FIPA 2017 (France) and the FIFA 2017 (Canada).
He has just completed the scripting, the producing and the directing of the short film "Le temps des fêtes".